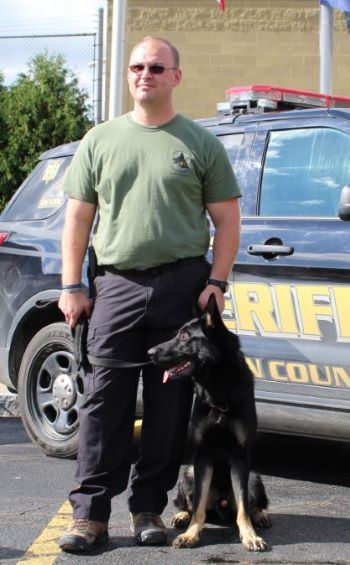 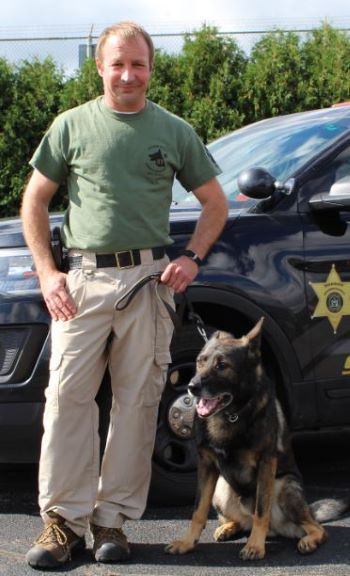 For any agency or event that wishes to request the services of an SCSO K-9, please complete the K-9 request application (PDF) and return it to Sergeant Shutt, Steuben County Sheriff's Office 7007 Rumsey Street Ext, Bath NY, 14830, or email Sergeant Shutt.

Sergeant First Class Daimon and handler Sergeant Shawn Shutt have been providing K-9 services to the citizens of Steuben County since 2012. Daimon is certified in narcotics, tracking and patrol and Sergeant Shutt is in charge of the K-9 program for the Steuben County Sheriff's Office and is a vital member of the Finger Lakes K-9 training group both as an experienced handler and NYS certified maintenance trainer.

Corporal Twiggy joined the Sheriff's Office in 2019 after Corporal Devin developed a debilitating disease. His handler is Deputy Thomas Nybeck. Twiggy is certified in narcotics and tracking and patrol. Twiggy is named in honor of Army Sgt. Devin A. Snyder from Cohocton NY, was killed in action in Afghanistan in 2011. Twiggy is an energetic, playful K-9 who voices his displeasure whenever separated from Deputy Nybeck.

Corporal Knapp joined the Sheriff's Office in 2019. His handler is Deputy Matthew Butler. Knapp is certified in narcotics, tracking, and patrol. Knapp is named in honor of Deputy Pete Knapp, of the Steuben County Sheriff's Office, who died of cancer. Knapp is a serious, focused K-9, who loves to work. 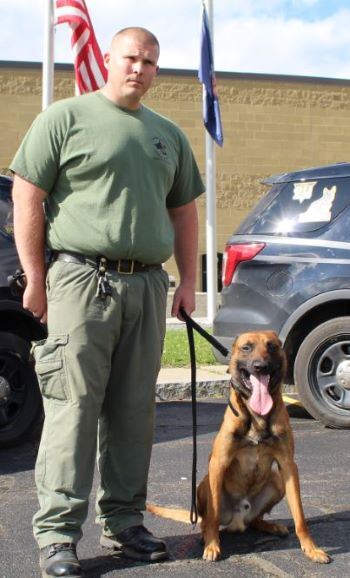 Deputy Nybeck and Twiggy, Deputy Butler and Knapp, Deputy Swarthout and Mac, along with Sgt Shutt and Daimon, will be working patrol duty and responding to incidents throughout Steuben County whenever the need for K-9 services is requested. All K9s will continue to train on a monthly basis to maintain their current certifications through the NYS Division of Criminal Justice Services and will be working with other units at the Sheriff's Office, such as the Critical Incident Response Team, Warrant Squad, and the Corrections Emergency Response Team to assist in any requested K-9 needs.

Twiggy, Knapp, Mac, and Daemon will also be assigned to work with area schools under Sheriff Allard's Safe School Program. They are also available to assist any local or state law enforcement agency that contacts the Sheriff's Office for assistance.